This shop has been compensated by Collective Bias, Inc. and its advertiser. All opinions are mine alone. #PlayWithPlaymobil #CollectiveBias

Did you know that play doesn’t come naturally for all children? Some children, especially those with developmental disabilities and specifically those on the Autism Spectrum, may find play challenging (especially pretend play). In fact, one of the early Autism signs that Lucas showed at the age of 2 was his lack of play skills. When he was younger, he typically just gathered toys in piles or lined them up. His skills have developed some but still his play time often consists of him acting out stories he has heard or seen other kids (or his favorite video creators) play. Not much of his playtime is filled with creative play ideas that he has thought of and developed himself but his ability to play using different play patterns has greatly improved over the years.

Lucas went through years of developmental therapy where he would sit with a trained therapist and play while he worked on his other skills like motor skills, language skills, and social-emotional skills. Even though he worked on play skills at therapy, I still feel like as a parent, a large part of my job in those early years was modeling play and showing Lucas how to play, both with toys and with other children. I wanted to share some tips from my experiences over the years for any other parents that might have children who need to be taught how to play. 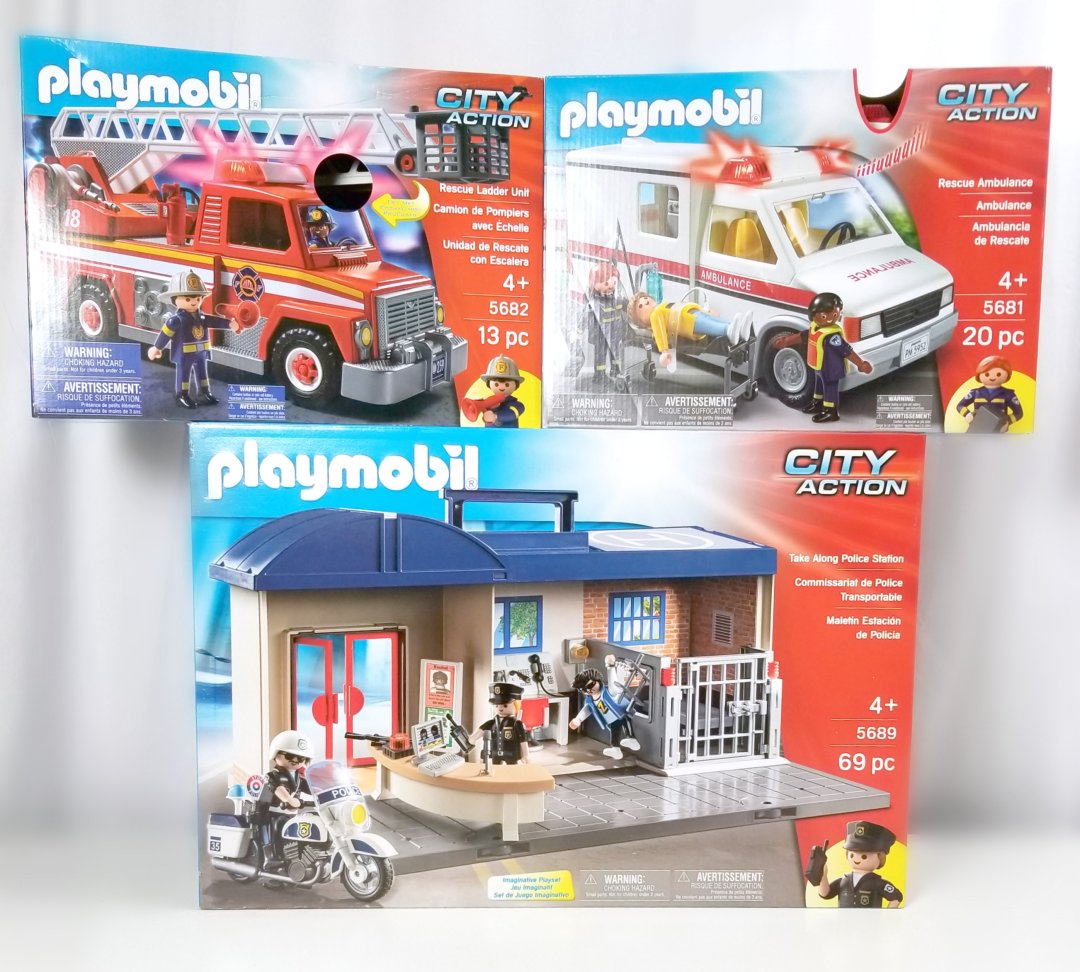 (Hover over the image above to get more information about the PLAYMOBIL toys shown and to purchase at Walmart!)

First, providing skill level-appropriate toys is a must and just as important (if not more important) than making sure toys are age appropriate because many children on the Autism Spectrum have younger interests. I love toys that kids can practice a variety of play skills with, from functional play to imaginative play and cognitive play to emotional-social play. Toys like PLAYMOBIL that feature iconic, realistic characters children have seen before (like the sets that feature community helpers) are wonderful because they can “drive” the vehicles around, mimic things they’ve seen firefighters and school bus drivers do before, portray a character’s emotions while playing, and (hopefully eventually) make up all kinds of stories with the character toys and their props and playsets. My kids love their PLAYMOBIL Take Along Police Station, Rescue Ambulance, and Rescue Ladder Unit. These toys are made to last and I love all of the details that go into each set!

PLAYMOBIL toys are classics but they are new on Walmart’s shelves so I was happy to find a great assortment of sets there and you are sure to find something that will interest your child. We ended up purchasing three different sets but there are a lot more on our wish list. Personally, I thought the fantastical dinosaur ones were pretty cool while Jacob had his eye on the Police Cruiser and Lucas wants to add the school bus to their collection.

Second, show your child how to play with their toys in the most basic ways. If your child typically just gathers or lines toys up, they most likely do not know what to do with the toys. Pick up a play phone and pretend to talk on it or roll a play vehicle back and forth and make sounds the vehicle makes (or press buttons on toys like these to start siren noises).

Third, play with your child! I would often role play different situations with the toy characters and talk out loud about what I was doing as I “played” so not only was Lucas seeing the toys being played with in different ways but he also heard my train of thought while playing.

Fourth, try out different environments during playtime. I love taking toys outdoors on nice days (and I’ve been thankful for these last couple of 80 degree October days here in Chicago!). You can also head to a local park or playground or even play in your sandbox if your child doesn’t have an aversion to the mess. This will help them transfer their play skills to different environments easier so they can take skills from their home to the classroom or a friend’s house.

Fifth, schedule a short playdate with another child who they know and stay nearby to help your child navigate through difficulties that may arise. While children may not play with the other child, having another child there provides the opportunity for social play should your child choose to engage in it. Even just one or two social interactions at the playdate, like practice sharing or taking turns, is beneficial when learning cooperative play skills.

Lastly, don’t give up! Teaching our kids to play can be challenging sometimes because they may not show interest or it may be difficult to break their repetetive actions as you try to teach them something new but keep at it. I know it can seem like there is a list of skills a mile long you are working on and it can be overwhelming but learning play skills is an important part of childhood and something many children with developmental delays or who are on the Autism Spectrum can learn with practice.

I hope these ideas have helped! What other tips do you have for helping children with special needs learn how to play? I’d love for you to share them with me on social so I can pass them on to my readers! Find me on Twitter, Instagram, and Facebook. You can also find more fun play inspiration here!