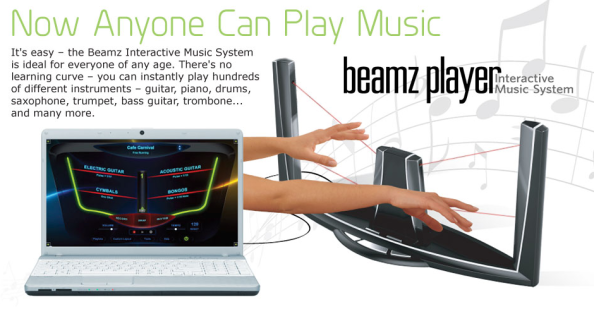 My family recently had a chance to review the Beamz Interactive Music System. According to the website, “The Beamz is an innovative recreational musical instrument and music entertainment product that enables people of all ages and skill levels to have fun creating and playing music. By breaking the path of each beam, this laser trigger-based instrument will unleash the musician in anyone.” I was excited to try it out. 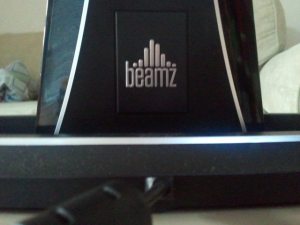 When we got the box I was surprised at how large the system was. Excited to try it, we took it out of the box and went to work setting it up. I soon discovered that it was not going to be as easy as I had originally figured it would be. The software and the disc of music needed to be put in a cd-rom drive. The problem was that my computer did not have anywhere for me to put a disc in. I tried to think of other ways to go about getting things setup. I went online and found a download of the Beamz software. I quickly downloaded it and installed it on my computer. The music was not going to be so easy. I wasn’t able to get the 50 songs from the CD as a download. I did discover though, that if I joined the Beamz community, I received some free downloads. I found a link to the community at the top of the website next to the social media icons.

I joined the community, got my free songs, and called the kids downstairs to play our new music system. At first, I was completely confused at how in the world we were supposed to use the system. We spent about 30 minutes sticking our hands in and out of the player in front of the laser and listening to random sounds being made. I thought it was all a little boring and wondered how it got such great reviews all over the web. I found a YouTube video and watched someone actually playing the system and I realized that I had spent a whole lot of time playing the Beamz the wrong way. Once I figured out the correct way to play it, I thought it was fun and the music coming from it sounded a whole lot better. I was still no expert at playing it but at least it wasn’t just sounds, it actually could have been considered {bad} music!

Sinisa got the hang of the system right away and enjoyed pretending like he was playing the guitar. Jacob was mesmerized by the laser lights and enjoyed knowing that he could move his hands to make fun sounds. I think that the Beamz system would be great at family parties and gatherings with friends but don’t think it will get much consistent use at our home.

(Disclosure: This product has been provided as part of a social shopper insights study for Collective Bias. #CBias All opinions are my own.)

This site uses Akismet to reduce spam. Learn how your comment data is processed.