When I was younger I went to Medieval Times Dinner & Tournament with my mom and brother. It was an experience I wanted to give my children as well so I was really excited when my family was invited to visit the castle and attend the debut of their first new show in five years.

Since my youngest is only two years old I chose to invite my mom and four year old nephew to attend the show with Jacob and I. We spent the car ride playing a guessing game of what kinds of things we thought we’d see at the show. We also were on the lookout for the giant castle that the show is in. The castle in Illinois is near a major highway so as we were driving we could see it and the boys started to get even more excited.

Once inside the castle we received crowns to wear. Since it was VIP night there was a cocktail party beforehand with drinks and delicious appetizers. We chose to buy the boys light up swords as well and I was happy to find that they were reasonably priced.

Before the tournament there is a little show in the lobby area. The King comes out and there is a knighting ceremony. People who attend the show can pay extra to participate in this experience. After the ceremony, everyone is let into the arena and seated according to what knight they will be cheering for in the tournament. {Ours was the black and white striped knight.}

Once seated inside we were given our dinner in courses. We were fed soup, bread, a huge piece of chicken, a spare rib, potato wedges, and an apple danish. The chicken and soup were my favorites. I ended up with leftovers to take home to Sinisa because there was so much food. Keeping in line with the “medieval” theme, the food was served with no utensils so you may want to keep that in mind if you bring little ones who might need a spoon for their soup or straw for their drinks.

While eating we watched the story unfold in front of us, watched the jousting tournament, and cheered for our knight. Here’s a little more about the new show at the Chicago castle:

While the new show has undergone a complete overhaul, some traditions remain. The live show still features two- and four- legged performers with a true medieval utensil-free meal, all in a recently updated, castle-inspired arena. However, the new live production presents even more of audience favorites such as live jousting, swordplay, horsemanship and falconry. Guests become part of the action, filling arena seats and cheering for one of six “Knights of the Realm,” named after historic regions of medieval Spain.

“The new show is designed to keep our guests on the edges of their seats from the opening moment,” says Saj Rizvi, vice president and general manager of the Chicago Castle. “New & returning guests will feel the electriticty in the air from the riveting new battle scenes and grand costumes, to the new lighting and on-going action set to a fresh musical score.”

After the opening, guests will witness intricate battles that are in reality precisely planned sequences with have been practiced daily. With authentic weaponry and enhanced armor, the new production presents non-stop action tied to the tempo of the music. And while there’s still a general theme of “good versus evil” throughout the show, guests will see much more of what they’ve requested – fight scenes that maintain the highest quality and safety standards. 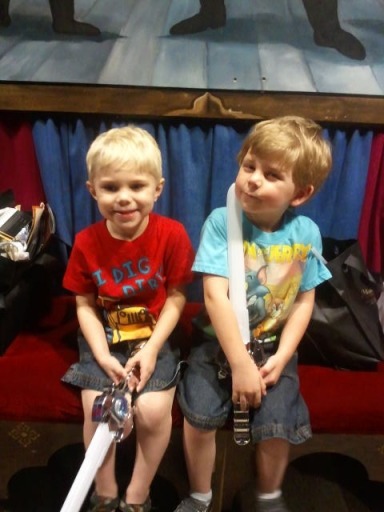 Since Jacob is only three, I wasn’t sure how he’d sit during the show but he behaved very well. He was entranced with the show and, though he didn’t follow the story line, he enjoyed all of the action. My nephew liked the show too, however it ran a couple of hours past his bedtime so he started to get sleepy towards the end of it. Overall, we really enjoyed the dinner and tournament and I am happy that my son got to experience the show that I have great memories of watching as a child.

Tickets can be purchased here.

{Do any or all of the following, leave a separate comment for each you do}

1) Leave a comment telling me why you want to win.

5) Enter another one of my giveaways {found here}

Giveaway ends June 1, 2012 at 11:59pm Central time. Giveaway does not include travel to Chicago or anything else other than one ticket.

(Disclosure: I received complimentary tickets for my family to attend the VIP night at Medieval Times. Italicized information in this post came from the press release but all other thoughts are my own. This giveaway is not associated with Facebook in any way.)